Radiation therapy for oral melanoma in dogs: A retrospective study

Despite the early notion that canine oral malignant melanoma is radioresistant, recent data suggest that external beam radiotherapy is effective in local tumor control. However, optimal fractionation schedules have not been established. The high rate of regional and distant metastasis is another problem that has hindered long-term control. The role of chemotherapy in the management of canine oral melanoma has also not been determined. In this study, data from 140 dogs irradiated at North Carolina State University were evaluated with the following objectives: (1) to compare the efficacy of three radiation therapy protocols (36 Gy, 9 Gy × 4 fractions; 30 Gy, 10 Gy × 3 fractions; or >45 Gy, 2–4 Gy × 12–19 fractions) for the treatment of dogs with oral malignant melanoma, (2) to identify any host or tumor factors influencing prognosis, and (3) to determine the impact of systemic chemotherapy on treatment outcome. Information regarding response to therapy, disease progression, and survival were determined from the medical records or from information obtained by telephone or mail survey. Relationships between host, tumor, and treatment variables and outcome measures (response, time to first event, and survival) were evaluated using Fisher’s exact test (response) and the Cox regression model (time to first event and survival). The median time to first event for the 140 dogs was 5.0 months (95% C.I., 4–6 months) and the median survival was 7.0 months (95% C.I., 6–9 months). In the univariate analysis, the following variables were associated with increased time to first event and survival: (1) rostral tumor sublocation; (2) lack of bone lysis observed on skull imaging, and (3) microscopic tumor burden. In a multivariate analysis of 111 dogs with complete data for these variables, tumor sublocation, bone lysis, and tumor volume were identified as joint predictors of time to first event (p <.001, p <.001, and p= .04, respectively) and survival (p <.001, p <.001, and p= 05, respectively). There were no differences in response, time to first event and survival between the three radiation therapy protocols used. Systemic chemotherapy had no impact on the development of metastatic disease, time to first event, or survival, although the dosages used in this study were suboptimal. External beam radiation therapy is effective in local disease control of canine oral malignant melanoma; however, the optimal fractionation scheme has yet to be determined. The high metastatic rate observed with this disease and the inefficacy of systemic chemotherapy indicate that further investigation into novel therapies is warranted. 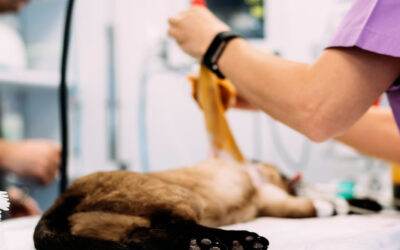 According to the Veterinary Cancer Society, one in four dogs will be diagnosed with cancer, and it’s the leading cause of death in elderly pets. Although oncology is a growing specialty in veterinary care, it can be expensive and time consuming for veterinary...