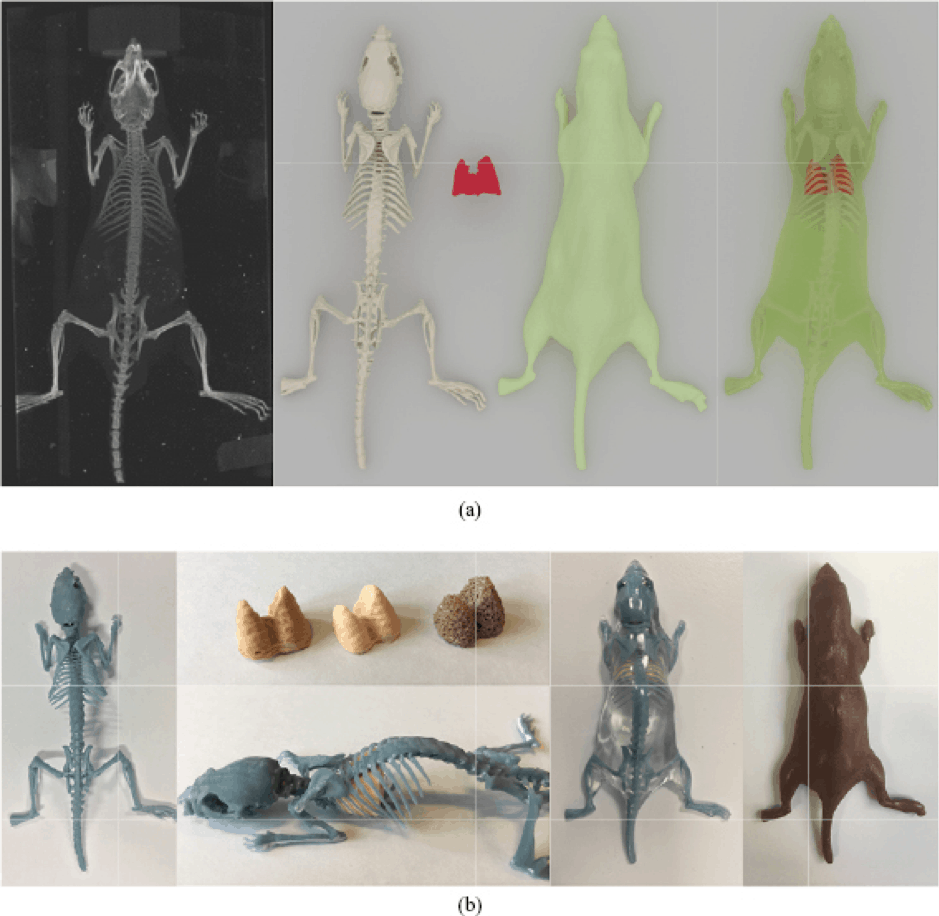 A subcutaneous tumor-bearing mouse was scanned in the microCT scanner, Xstrahl SARRP, its organs manually segmented and contoured. The resulting geometries were converted into a stereolithographic file format (STL) and sent to a multimaterial 3D printer. The phantom was split into two parts to allow for lung excavation and 3D-printed with an acrylic-like material and consisted of the main body (mass density ρ=1.18 g/cm3 ) and bone (ρ=1.20 g/cm3 ). The excavated lungs were filled with polystyrene (ρ=0.32 g/cm3 ). Three cavities were excavated to allow the placement of a 1-mm diameter plastic scintillator dosimeter (PSD) in the brain, the center of the body and a subcutaneous tumor. Additionally, a laser-cut Gafchromic film can be placed in between the two phantom parts for 2D dosimetric evaluation. The expected differences in dose deposition between mouse tissues and the mouse phantom for a 220-kVp beam delivered by the small animal radiation research platform (SARRP) were calculated by Monte Carlo (MC).

MicroCT scans of the phantom showed excellent material uniformity and confirmed the material densities given by the manufacturer. MC dose calculations revealed that the dose measured by tissue-equivalent dosimeters inserted into the phantom in the brain, abdomen, and subcutaneous tumor would be underestimated by 3-5%, which is deemed to be an acceptable error assuming the proposed 5% accuracy of radiobiological experiments.

The low-cost mouse phantom can be easily manufactured and, after a careful dosimetric characterization, may serve as a useful tool for dose verification in a range of radiobiology experiments.